Up the Thame valley and over the Renjo La

Sorry to have been off line for as few days but we have been up a fairly remote valley and over the first of our high passes. There’s been zilch in the way of signal which, in many ways, has been quite refreshing. We’ve been able to enjoy the trekking and the sense of isolation as well as having little in the way of distractions. And to that end we have started to enjoy each other’s company and the team are getting along really well.
We’ve had the first couple of our chats where we’ll be covering poignant issues before we get to Base Camp or on the hill. Subjects have included Acute Mountain Sickness (AMS), HACE and HAPE as well as frostbite prevention, how to avoid getting cold hands and feet and the importance of concurrent activity. We’ve also been chatting through various permutations that we may encounter during our acclimatisation rotations on the hill and the group feel that they are actually a part of the expedition rather than just being treated as a commodity. I’d like to think that they are starting to have a sense of ownership of the expedition – after all it is the trip of a lifetime and it’s nice to know what is potentially going to be happening through the next few weeks. I also hope that they will all be taking away some top tips, handy hints and a sense of awareness of how to organise and run an expedition so that they can build on the skills and knowledge they have already. 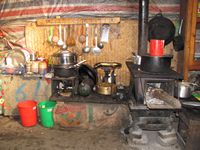 The last few days, since departing Thame, have seen us trekking in almost complete solitude. We saw a couple of other trekkers on our way to Marylung where we stayed for a couple of nights and hiked up above the settlement to around 4,800m. Then we continued past the turn off for the Renjo La to go to Ayre (around 4,450m) where we had the place to ourselves. After a night here we trekked up the hillside to join the main trail over the Renjo La and are now camping in idyllic surroundings at 4,950m. So we are out of teahouses for the next week or so and under canvas and being tended to by Bhim, one of the best cooks I have come across. We have worked together a few times and he is exceptional and the great news is we have him with us for the next two weeks as well as for the duration of our stay at EBC.

This is the first of our high camps and we’ll be gaining height and trekking over the Renjo La tomorrow before dropping down to Gokyo. There seems to be a keen contingent to go up Gokyo Ri for sunset so we may be in for a long day tomorrow but this is then followed by a relatively easy day down to Tagnag the day after.
So apart from the odd tummy rumble (which have been successfully been blasted with a ‘Cipro Bomb’) everyone is in fine fettle, we’re all sleeping well and just enjoying the fantastic environment.
A selection of random photos and out for now. 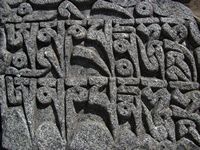 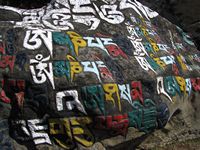 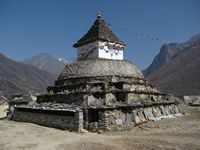 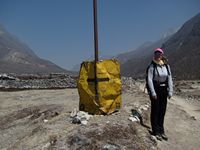 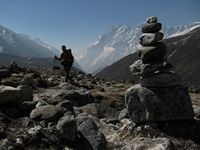 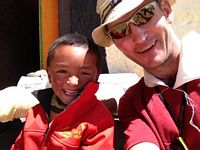