Everest – another photo and what it says 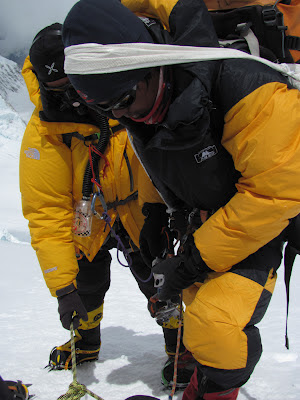 I don’t want to sound like I’m being the mountain police but I do find it a bit worrying that people go to Everest (or any other high altitude arena … or even any climbing situation other than a learning and coaching environment to be honest) without knowing at least something about the skills that will be required and an understanding about their gear and equipment. Being well versed so that actions become second nature not only makes you more of a proficient, accomplished and self contained climber and mountaineer, but it also means that you are more likely to have ownership of your expedition and be less of a liability – not only to yourself but also those around you.
I’d noticed this guy as we were setting off up The Lhotse Face en route for The South Col. He was having everything (and I mean absolutely EVERYTHING) done for him by his trusty Climbing Sherpa. He approached each anchor and just stood there as the Sherpa unclipped, reclipped and transferred his jumar etc etc.
Folks, this is not what Climbing Sherpas should be doing. I can appreciate that some people may well end up on Everest having not tackled fixed ropes before (but you do have to ask yourself whether they therefore have enough prerequisite experience) but if you can’t even be bothered to learn how to do this whilst you are trekking in, or sat around at Base Camp, then it surely doesn’t bode well. This was 7 weeks in to the season! How on earth had he been negotiating the Khumbu Icefall? What do people like this expect will happen if their Climbing Sherpa gets assigned to help out with a rescue, or fall ill? What then? Yes, I can see a Sherpa doing this sort of stuff on the way down when someone is jaded and debilitated … but on the way to the summit?!?
Personally I advocate self reliance, being in tune with your environment as an independent mountaineer, and being able to employ a variety of techniques according to the ever changing mountain environment. That way you are more likely to be a reliable member of a cohesive team rather than a complete liability.
Not only that but I also noted that he had his crampons on the wrong feet! Without being arsey I mentioned this to him in passing and his excuse was that he’d been in a rush to go for a crap that morning! But it takes as long to put them on the right feet as it does to put them on the wrong feet. Indeed, with the faff factor, it may well have taken longer. And shouldn’t he have noticed and done something about it?
When I saw them again 3 hours later … well then I got a bit more emphatic. He clearly thought I was being an arrogant task master so I asked his Climbing Sherpa if he was married. ‘Yes, sir, one daughter and two son.’ I asked if he wanted to see them again and pointed out that his client had his crampons on the wrong feet and that his client was jeopardising not only his own life but also that of him, the Sherpa. He nodded and saw where I was coming from and I made my way on towards The South Col as they took a break to sort it out.
Recently there have been calls for Everest to be closed or for companies to be more rigorous about their selection criteria. Closing the mountain is clearly not the option because when it reopens a few years later then it would be even busier with 4 or 5 season’s worth of people there. Ok, so a lot of them would have had a few years to get ready for it but I don’t really think that some folk would actually use their time constructively and we’d still end up with people being there without a clue. Only more of them, among more people and bigger crowds.
It’s down to the companies and the guides to ask for mountaineering cvs and to make sure that people are suitably well experienced. Obviously there are always going to be people who will stretch the truth about their experience but you can usually weed these people out.
Unfortunately … those who are weeded out and advised that they should do x,y and z and be ready for 2014 instead of 2013 end up going to the agencies in Kathmandu who are less scrupulous about who they take, what level of provision they offer and how professional their set up is.
People ask more questions of the second hand car dealer about whether they should purchase a new motor than they do when parting with US$000s for an Everest expedition. The client doesn’t necessarily know what questions to ask about Base Camp services, Climbing Sherpas, ratios, oxygen, medication, high altitude issues, inclusions, exclusions, communication, logistics etc etc – but they should at least recognise that they are taking on a risky venture and there are plenty of things that they can do in advance to increase their chances of summiting.
All that they know is that they have some oxygen and some Climbing Sherpas who may have summited Everest already and they think that this is ok. But it’s not.
A Climbing Sherpa who has summited Everest is not necessarily a good Everest Climbing Sherpa. They are tremendously strong but you really want to be with ones who are not only seasoned mountaineers but who are knowledgeable, professional and who are dependable.
I could go on.
Here endeth the lesson.