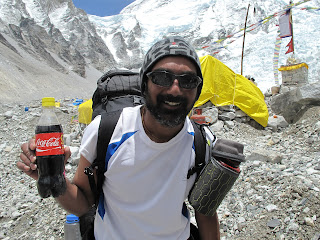 This is Partha, and Partha has just returned from the summit of Everest. 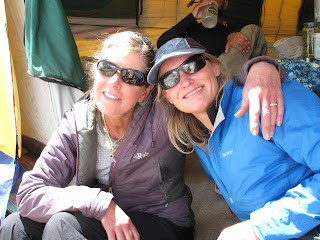 As have Susan and Jen … 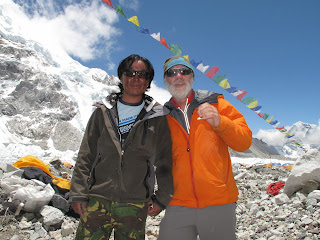 and Giles.
I really think that it is testament to them, as self sufficient mountaineers in their own right, that they came back from the summit of Everest without looking gaunt, blistered, sun burnt and dehydrated.
Yes, there was obviously a certain amount of direction and leadership from me, and we had discussed during the trek in about the importance of looking after ourselves, the importance of concurrent activity and the consequences of becoming dehydrated. But there is only so much that I can do and it was up to them to then put all that, and more, in to practice.
As an example, if you don’t drink enough one day then you’ll possibly be ok the next. But if you don’t drink enough each day during the expedition, then over the period of 7 or 8 weeks this will have far reaching consequences. Dehydration can not only have a marked effect on your performance but also makes you more susceptible to the effects of altitude (AMS / HACE / HAPE) and more prone to frostbite and hypothermia.
So on arrival at Camp 1 and Camp 3 my team didn’t just sit on their rucksacks, take in the view and give themselves a hearty pat on the back. They busied themselves getting a cooker on the go and started melting snow. Then after a rest and getting their breath back they had a drink ready and immediately set about getting another batch of snow melting.
That amounts to at least an extra litre or so every day that they were taking on board compared with less disciplined folk on the hill – which partly accounts for why so many people come back from Everest looking dishevelled and drawn.
Not so my illustrious group of mountaineers – they look like they have just popped up CatBells (except for the facial growth and a slight aroma, that is).
It all sounds easy in the comfort of your own living room but believe you me it takes a certain amount of motivation to muster the energy to do even the most simple of chores.
Another area where they looked like they were seasoned mountaineers on a day outing was their approach to maintaining themselves each day whilst on the trek and the mountain. Less experienced folk will forget the importance of sun cream, sun glasses, layers and, again, hydration.
With my lot they responded to the ever changing conditions instinctively. For example, when negotiating through The Khumbu Icefall at some stage the sun comes up (happens every day but you’d not have thought it, the way that some folk react) and my team would realise that it was time for sun cream. However, there is little point applying suncream and continuing only to stop 15 minutes later because you are hot. And then 10 minutes later because you are thirsty etc.
So this is where concurrent activity (otherwise nicknamed blackcurrant activity) becomes really important – as well as making you more efficient which, in turn, means you’ll get to camp that bit sooner and start brewing up and sorting yourself out.
First off it’s time to assess where to stop – little point stopping in a dangerous area and far better to keep moving for an extra 5 minutes, even though you’re in the sun, to get to an area free from objective danger. Next it’s rucksack off and suncream, lip salve and sunglasses on. Whilst you’re at it you may as well have a quick bite to eat and every time you eat you should have a drink (drink is more important than food and food more important than sleep).
It’s now time to remember that you were moving in the cold of night and have plenty of layers on and, guess what, within 5 minutes of starting out again you are going to get hot. So right at the last minute, and after the obligatory photos, it’s time to change gloves, take your woolly hat off and pop a sunhat on under your helmet, layer off until comfortably cool, pop your rucksack on and get going.
This routine applies not only to everytime the sun pops up but you should be doing similar things whenever you have any stops for, say, popping crampons on or putting your harness on.
My lot managed this with aplomb and I think that the photos speak for themselves. Well done them! 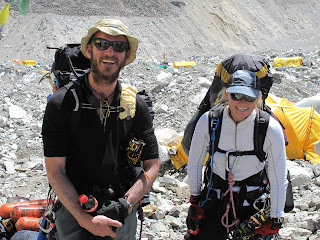