Preamble … I am sure that you are well acquainted with the concept of layering – creating air pockets and trapping layers of warm air between garments – whether that be the upper body, legs, head or hands. By removing or adding thin or thick layers you can regulate your temperature according to whether you are working hard, standing still at a belay, resting for lunch or whether the weather has changed and it is getting warmer or cooler. It doesn’t take long to whip a layer off or pop a layer on and can make the difference between comfort and misery particularly if pre-empted.

With boots, however, this isn’t really an option. Apart from perhaps adding a gaiter (and even that would generally be on or off for the whole day) what you put on your feet at the start of your day is what you will probably be wearing at the end of the day. So it is vitally important to make sure that a) you have the right sock combination and b) that the boots are suitable for the day’s activity.

In UK summer, Scottish winter or The Alps it is not uncommon for people to have 3, 4 or even 5 pairs of boots that can be swapped and changed according to the weather conditions, the activity being undertaken and the length of day. On Everest (and other ultra-high altitude mountains) however, this flexible approach is not really an option. Yes there is a trekking phase where trainers / approach shoes / light hiking boots might be used, and an acclimatisation phase where plastics might be worn, but for the summit phase nothing but the warmest boots will suffice. You don’t really want to be wearing one pair of boots and carrying another … it’s just not an option worth considering.

When it comes to the arena of ultra-high altitude the choice of boots is quite limited but that doesn’t mean that you should settle for any less than the best. The main protagonists are La Sportiva (Olympus Mons Evo), the Millet (Everest) and the Scarpa (8,000ers*). It’s quite difficult to compare like for like as it partly depends on the shape of the foot for the individual. Having said that, these boots tend to be a bigger fit than you would otherwise wear for other activities so you may well find that any of the brands and models will fit you with plenty of wiggle room.

One of the difficulties with high altitude boots has always been a trade-off between warmth and volume. Yes you want to have a warm boot but you don’t want a boot that is too voluminous. Conversely a slim, low volume boot will possibly be a bit light on the temperature ratings. Equally the boot has got to be up to the job in hand, be rugged and totally bomb proof. And lastly it’s got to be easy to put on and take off even in the coldest of conditions where one might be wearing big thick mitts and where operations are potentially compromised by lack of dexterity.

Please step forward the most recent version of the very successful La Sportiva Olympus Mons Evo. I was never a great fan of the original Olympus Mons as the gaiter was pretty baggy and the boot so oversized it was unresponsive but the most recent version has a nice slim look and feel to it and this has been accomplished by using some pretty high tech materials and innovations.

The Olympus Mons Evo has a heavy duty Velcro fastening protecting the weather resistant zipper behind. But unlike some waterproof zippers this one actually feels reasonably hard wearing and rugged (unlike the zippers on my original Scarpa 8,000ers which felt way too tough, like they’re going to blow open with every doing up … and there’s no velcro baffle for back up or protection).

The velcro and the zipper extend way down to the front of the boot making opening and removing the boots a cinch. The inner and outer boots are configured in such a way that the inner slips in and out with great ease … no need to be standing up and pushing all your weight down to get the inner into the outer. 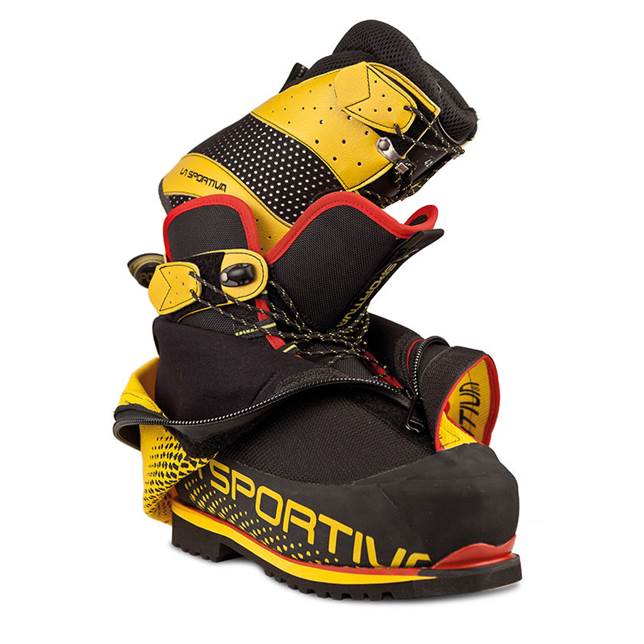 The Cordura gaiter is nicely slimline and very hard wearing and is a massive improvement on the previous version. I guess there will always be a debate about whether the gaiter on any of these boots should go under or over the down. If it goes over and is too slimline then it may well compress the down and create a cold lower leg which, in turn, will cause less warmth to flow to the foot. Conversely if the gaiter goes under then that precious down will come spilling out the moment a crampon comes in contact with it. I’ve experimented with both and I am generally in favour of the gaiter going over the trouser and this is still achievable even with the new slimmer lower volume Olympus Mons Evo.

One comment, however, is that the elasticated top on the gaiter is not adjustable and is a ‘one size fits all’ configuration. Personally I’d prefer to see adjustability here but it’s a fairly minor issue.

Like the Everest Millet (reviewed elsewhere) the boot is warm. There are some really great materials that have been used sensibly to create warmth where necessary but still keeping the volume down by not having the boot too over spec’d. I haven’t managed to get the boots scientifically tested and do an exact like for like comparison … but my gut reaction is that they are pretty much as warm as each other and are certainly up to the job of performing at 8,000+ metres.

Having said that the boots can only be warm if they are supplied with a heat source so, as with all double boots, it is well worth keeping the inners in your sleeping bag during the night (a cold boot will make your foot cold before your foot can make the boot warm) and if you have poor circulation (which will be doubly compromised by the lack of O2 at altitude) then a warm up sachet or electric foot bed would still be advised.

Unlike the Everest Millet the lacing system on the outer boot is pretty nifty and easy to do up even with big gloves on. The Millet has some stupid (and I do mean stupid) red string (and I do mean string) … they are a very poor excuse for laces. The Olympus Mons Evo, however, has a personalized lacing system that works. This is the case for both the inner boot and the outer boot. The laces from either side of the boot end up attached in to nice big pull tab. Grab the tab and pull and both sides of the boot are tightened. Then, using the tab from left to right and back again you hook both laces into an open lace hook and end up popping the tab on to a velcro patch. And ‘Voila!’ the laces are done up and tidied away. No need for fiddly knots and therefore no chance of fiddly knots coming undone. Equally if you need to tighten or loosen the boot mid journey it really is a cinch.

Another thing that I think really deserves a mention is that the larger sizes of boot still have a reasonably narrow sole width at the heel. The reason why I mention this in particular is that I have encountered quite a few people who have had to cut away at the side of the heel on their Everest Millets to enable their crampon heel clip to fit properly. Basically the heel is so wide that the bars going from the heel clip to the crampon are forced apart or, worse still, end up in a spongy arrangement where they are being forced down by the heel box.

Not so with the Olympus Mons … the heel section is narrow enough to make sure that it won’t compromise the fit of your crampon (having said that you still need to check boot crampon compatibility BEFORE going to the mountain because you might have crampons that I haven’t managed to access and check their fit).

On that note I have tried the Grivel G12 and the Petzl Vasak crampons and the Vasak provides a very nice fit indeed. And, unlike the G12s, the Vasaks don’t have serrations on the rear heel points which have been known to catch on the ladder rungs whilst crossing crevasses (check out this video to see the consequences of getting your heel caught mid ladder).

All in all these boots are a great improvement on the original Olympus Mons and they are comparable in price and are a tad lighter to the Everest Millets. But, importantly, they are simply superior.

*I haven’t tried and tested the newer Scarpa 8,000ers but I know a few people who have them and they all say the same thing … the gaiter with its circular zipper system is ridiculous and just ends up sinking down the leg like a baggy loose spring. Also the zipper isn’t protected by a baffle so there’s no ‘Plan B’ if the zipper should fail. The general consensus is that they wouldn’t buy them again unless these issues were addressed.